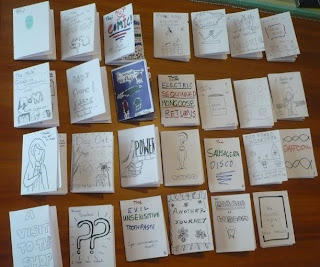 The 2012 Mini Comic event was an amazing success. Despite me making a mistake with the dates it was part of World Mini Comics day in May.

The day began with Paul Thompson's and Ingi Jensson's presentations about all things comicy and Icelandic. Both were brilliant, I learnt absolutely loads to use with my own work. Paul spoke eloquently about all aspects of comic storytelling and making visual jokes work. Ingi gave a powerful presentation about style and the ups and downs of his comic career. We also learnt alot about Iceland and Ingi's cool uncle.

The comics making event was great. We had a constant stream of people of all ages attending wihich totally nearly 70 overall. The pace was relentless and everyone had a great time. Loads of great comics were made.

It was great to speak to all of the various folk who attended and help them get started. Everyone was full of enthusiasm for comics and cartoons. It was particularly good to speak to Kris, a gifted cartoonist, who wants to get into comics after retiring. The Awesome Comic Machine award should go the Ruth aged 11, who spent the whole event relentlessly drawing amazing comics without moving, pausing or flagging.

There was great works byPaperjammers Matt Gan and Lydia Wysocki. Ingi did a great one too, but I'll have to pick up a copy next week so I don't know its name. Britt Coxon's were amazing too. It is now a tradition that Paul never finishes his work during the event.


It was amazing to see Nigel Auchterlounie and his mini comic The Adventures of Whinnie the Dog. There was also a great comic by Peter Coulthard titled the Scarecrow, there was loads of great comics made by unknown makers one titled A Trip to the Shops was a particular hit. The photo shows most of them that I picked up, but I know I didn't get them all.


As part of the workshop we will be sending samples of them over to Mike. He was able to attend the morning but hopped on a plane to Malta, so the comics will reach him in the next few days. He's doing a reciprocal zine which he's promising to send back to us.

I couldn't have managed the event without the help from a number or folks, especially Britt and Paul for doing the photocopier duties. Also, Sophie and Judith were both brilliant as well.

As usual the Newcastle City Library were great and the success of the event was due to the helpfulness of all the staff involved, particularly Pauline and Patrick.

Many of the attendees were keen to hear about future events, which got us thinking.  You'll have to wait and see for now.
Posted by Cuttlefish Comics at 19:52