I did a thing. 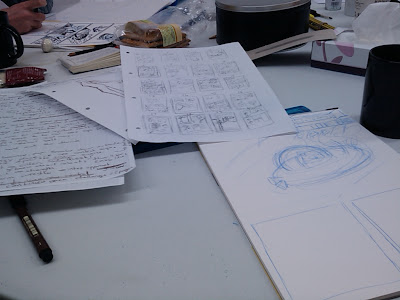 On 24 hour comic day I created a comic. It was 24 pages long, it made enough sense to be called a story and had characters in it and everything. I'm happy with the result. Above is a little preview of the comic.

I didn't ink the comic though I would like to, I'm saying this counts within the rules of cleaning up for printing. A comic in blue pencil won't print up too well. I'll put up a few more images once I've taken them.

Note: this method is how I survived 24 Hour Comic Day, it's not the only method and it may not work for you. Sleeping before the end may lead to being unable to finish for some.
Posted by Britt Coxon at 18:40 15 comments

Some excellent 24 Hour Comics from around the world.


So, here are some of the 24 Hour Comics I spotted flying past on the #24HCD twitter tag. All of these are excellent.

@TheBestMattBell : This one from Florida definitely reflects the horrors of remaining awake for 24 hours. Matt realises it's gotten out of control around 12 pages in, and decides to confront his protagonist, unfortunately by this point, his drawing hand is broken.

@careydraws : Carey Pietsch from Philadelphia brings us this nicely ambiguous dark tale. I like this one a lot. Great art style. Creepy stuff.

@83rw : Richie Williams, a man operating a wacom tablet somewhere in Missouri has produced a disturbing catalogue of freaks, like a cross between the imaginations of William Burroughs and an eight year old who just won't stop sniggering. There's something not quite right about this. I like it.

@Oversimplified : James Kersey gives us a world in which and two or more robots, one armed with a stick, try to find a place where they won't be murdered. Robot murder is all too common and the art style reminds me of The Flaming Carrot, which is a good thing.

@Esaholle : Twenty four excellent pages from Finland, a graphical ecology requiring some decoding. Muhos County Library is clearly the place to be for 24 Hour Comics Day.

The 'remake the rules to suit your requirements' approach


Having undertaken the challenge a couple of years ago, and struggled to create a 24 page story, I decided to take a different approach this year. Instead of creating a 24 page comic from scratch, I decided to create an 8 page picture book, that I'd already written most of the script for, and had completed a couple of character sketches for already too.

So how did it go? Well having far less than 24 pages to do meant I had plenty of time to tweak the script, to play around with characer sketches until I was happy with the way the stories single character looked, and to create 8 pages and a front cover to a standard I was happy with. Also I had some time to spare to take some time out and have a bit of rest in another room from the event part way through. 24 hr comic day purists will probably be shocked and appalled at my reinvention of the rules, but ultimately I ended up with something I was pretty happy with, which I don't imagine would have been the case if I'd stuck rigidly to the rules. I just don't work quickly enough to make a satisfactory 24 page comic book in as many hours.

So now what? I'm planning on printing up copies of the book to send to a couple of magazines to see if they might like to print a regular cartoon featuring the books character. Fingers crossed. 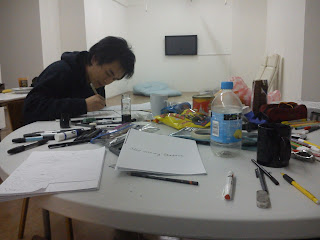 P.S. May I give Matt (left) a big thankyou for organising the whole event and allowing my picture book to get completed

Posted by James Wilkinson at 18:15 1 comments

So how did it go? 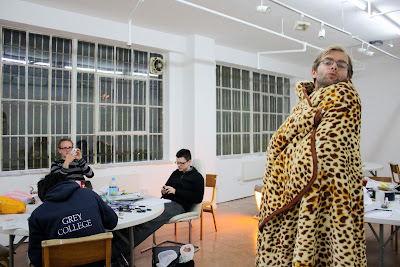 My current recommendation for finishing a 24 hour comic is to sleep loads and while awake never be without a glass containing the following ingredients:
So, here's how it went: I successfully made a comic with 24 pages.

I tend to view 24HCD as a massively intense idea development day - and while I technically finished a comic with 24 pages, it's not going to get published anywhere. This has been the case every time i've done it. That's not to say I'm not happy with the outcome - I am - but more as a learning exercise and providing me with ideas to develop further in other comics.

So here's the breakdown of the comic:


Pages 1-5:
A robbery is occuring in a sci-fi city. A sci-fi city was chosen because it would allow a certain flexibility with realism.

Not enough flexibility as it happens, and this is a lesson for next time: choose a minimal environment you can draw sustainably and quickly. Make your characters fish, robots, beans, monsters but most importantly, closer to 2D than 3D. Don't make them real human beings with real human hands, because that's just too damn hard at the best of times and 24HCD isn't the best of times.

The robbery fails, and our hero, Jupiter Junior is saved after jumping off the building roof by the Techno Robbery Examiner in her flying car, who tells him that he's failed his Techno Burglary basic certification due to a) bungling the safe, and b) failing to spot that one of his colleagues deliberately tampered with his parachute to take all of the loot.

Pages 6-13:
Junior returns to his caravan and tries to announce his PASS to his girlfriend, Malena, who is already aware that he failed and dumps him, because really what she wants in a boyfriend is someone who can rob her fathers house.

His next phone call is to his two partners in failed crime, both of whom passed and complain that they would have distinctions if Junior hadn't bungled the safe. No hard feelings about the parachute, oh and by the way, they're still going to do the job on Malena's fathers house he told them about. A shame he can't make it, but they'll still give him a ten percenter cut for putting them onto the job.

Junior gets himself together to do the job anyway, due to some television documentary on Malena's father, which contains some baiting aimed at him from Malena. The object we're stealing is apparently some artifact from a war against Carnoxotles where the dad was a general. The plot starts to fall apart at this point, but Junior doesn't notice so buys all the kit he needs and starts the job.

Pages 14-18:
The job: Junior makes his way through the mansion grounds and into the mansion, dealing with dogs, getting onto the roof, lasers, secret doors and pits full of spikes. The artefact looks suspiciously like a chess piece modelled on an axolotl, and on page 16 the safe type and cracking echoes that on page 2.

Once the artefact is removed from the safe, Junior is attacked by really cute Carnoxotle's who can't decide whether he qualifies as food. They conclude that taking some small bits out of him would allow them to make this judgement.

Junior flees, and encounters his two ex-partners who are already on the job. They end up being eaten by the Carnoxotle's that he's set free by removing the artefact.

Pages 19 and 24:
Junior escapes into the bedroom of Malena, and tries to convince her that now he has the artefact they can be rich and move away from her father etc.etc. But this turns out not to be why she wanted it.

The father turns up, shoots Junior in the back and explains to Malena that trying to awake her sisters to have him (and all the evidence) eaten was quite a trick and reminds him of her mother. The sisters are back in their room now. While this father/daughter conversation is going on, Junior escapes through the window.

Junior ecapes across the lawn, The Father notes that Junior did ok - almost a pass, revealing himself to be the head of the thieves examining board/guild/whatever, and tells Malena that if she sees him again, she should tell him.

The final page is an epilogue of Malena on the phone asking Junior if he wants to come around to her house for dinner, to meet the family.


Too ambitious and doesn't quite hang together, but having some good bits of action, a few bits of funny and some ideas worth stealing for other comics.

A successful 24 hours I think. The others should be along shortly to tell you how it went for them.

Email ThisBlogThis!Share to TwitterShare to FacebookShare to Pinterest
Labels: Aftermath, Axolotl, Doesn't quite hang together, Monsters. October 2012, Paul Thompson, Robbers, Too much plot

The Big Draw at the Star and Shadow Cinema

As well as our 24 Hour Comic, other drawing events are happening this week at: The Big Draw at the Star and Shadow Cinema.

You can read all about it here: http://starandshadowbigdraw.blogspot.co.uk/. A number of members of the Star and Shadow and Paper Jam Comics Collective spent a few hours yesterday evening playing the Surrealist Exquisite Corpse game. Here we are at work:


Here are a couple of the results... 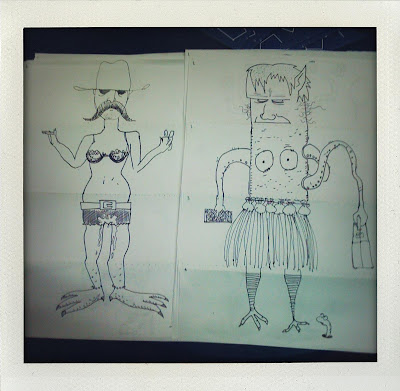 So, preparing for 24 Hour Comic Day once more. It is happening tomorrow at the Globe Gallery. Stop by and say hi!

This will be my fourth, and my third in company. I've learned a few things, and I'm going to write them down now so I don't forget them. Here are Twenty Four top tips.


Things to do with the survival:

Things to take that will help with the comic:

Things to do with the story: