Here's an almost definitive list on Mini Comics created at the Mini Comics Event. They were all great. They ranged from the awesomely artisitc to the darkly disturbing. 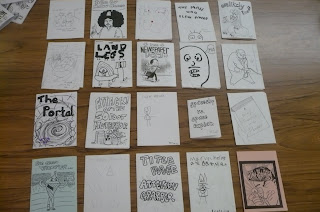 There's a couple not on this photo, only because we didn't have copies.
Here's the list of titles (in no particular order)
On the Metro
I go by Many Names
Untitled War
The Man who Flew Away
Unlikely Friends
A Whale in the Sea
The Land of Legs
Ingi's Newspaper Day
Ha
Untitled Lead
The Portal
Attack of the 50 Foot Metaphor
Super Mouse
Spaceship vs Spaceship Captain
A Brief Treatise on the Penguin
Ice Cream Wrestler
The Shape Dilemma
Title Page Attention Grabber
Marvel Heroes and Batman
Not shown here are Why Me? Lost Dog, Paul T's and Andy W's unfinished works.
Posted by Cuttlefish Comics at 15:32 0 comments

Today we participated in the first Mini-Comics day at the Star and Shadow cinema. It was an excellent event arranged by Mike D. Lots of Paperjam Comics Members turned up along with a loads of non-Paperjammers. It was great that lots of kids attended and also that the adults also joined in with the comic making fun. The were loads of excellent works created and printed, it was also fantastic to chat on with people about comics and creative pursuits in general.

We've got loads of the printed comics which well probably swap with other particpants around the World.

It was fantastic to see Ingi, Terry, Andy, Daniel and Lily, Paul and Britt. Some of these folks didn't quite finish of their comics but the works looked great and we're all looking forward to seeing the finished articles.

Also a big thanks to everyone who helped out and tidied up at the end, we couldn't have managed without you. 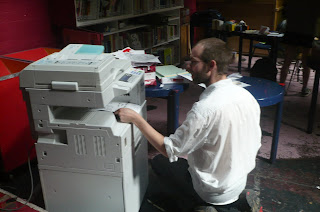 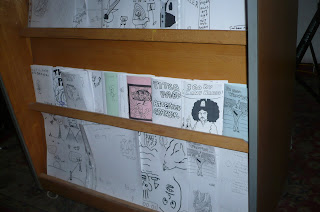 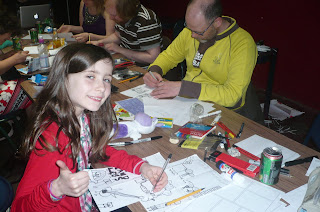 Posted by Cuttlefish Comics at 19:58 0 comments